Before coming to Texas I lived 14 years in the East Valley of Phoenix, Arizona. In addition to my full-time day job, I had one of those “full-time/part-time” jobs working for the Phoenix Suns. A close friend and I ran the Suns Team Shop on the lower east side of what was then called America West Arena.

These were the Phoenix Suns days of Amare Stoudemire, Shawn Marion, and Steve Nash. Steve Nash was busy winning back-to-back NBA Most Valuable Player awards. You couldn’t throw a rock in Phoenix without hitting a billboard that had his picture on it. He was famous locally and across the country.

I always wanted to meet Steve Nash. He’s my favorite point guard to ever play the game. But in 8 years of working there, I never had the opportunity. Interestingly, we did get to know his parents a bit. They were frequent customers of our store.

They came to our shop because we purposely never blew their cover. We never told anyone who they were. That may sound silly, but Steve Nash was such a big deal then that if people knew who they were, they’d be swamped with hangers-on trying to get close to their son. So to us, they were “John and Joan”. And they appreciated that.

Incredibly nice people, it was cute listening to Joan because she always referred to her son as “Steven”, not Steve.

Joan was visiting with us in our store during a game when two ladies about 5 feet away were critiquing a new Steve Nash shirt we’d just gotten in. It was a black shirt with a white artistic rendering of his face.

In voices too loud for the store, they began dissing the shirt. They didn’t like it. Why was it black and white instead of purple and orange? Why didn’t it have his #13 on it? One of them even used the word “ugly” and said it didn’t even look like him. 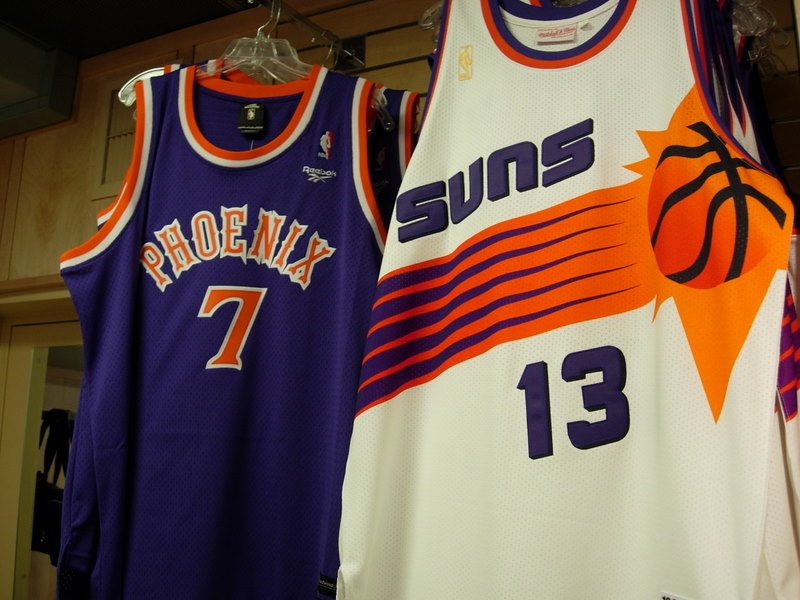 What I want to do at this moment, I can’t do. I want to say to these ladies, “Do you know who’s standing next to you?” But I can’t. So I’m watching Joan, to see if and how she will respond.

The more these ladies talk down about the shirt, the more Joan bites her lip. Finally, she sidles up next to them like a regular customer. Running her hand over the image of her son she said in a kind voice, “Oh, I don’t know. I think it’s a rather nice likeness of him.”

What a gracious response.

Would those ladies have said what they said had they known Steve Nash’s mom was standing 5 feet away?

But it makes me think.

How often do we say things about other people that we wouldn’t say if their parents were standing right next to them?

And if that’s true, then how often do we say things about other people that we wouldn’t say if we remembered their Creator is standing right next to them?

The Bible says we are, male and female, created in God’s image. The theological term is “Imago Dei”. When you and I look at any and every human being, we are getting a tiny glimpse of what God looks like.

Simply put, it is impossible to speak poorly about another person without speaking poorly about their Creator. Because that person bears the image of God.

As we walk through our days, let’s remember every person we meet bears the image of God. And because of that, they have infinite and inherent worth. Let that truth guide our speech.

May we be kind and affirming in our words, remembering their (and our) Creator.