9:45 AM on Friday,  June 8, 2007 at Aqua-Tots Swim School in Mesa, Arizona. Ron was working on his laptop while Paul and I were sitting at the meet and greet desk behind the glass.

A guy in a faded, forest green golf shirt walked up to the window. He looked a little frazzled.

Paul slid the window open. “Hi. How can I help you?”

“Do you take donations here?”

Donations? Maybe he has the wrong place. There’s a Salvation Army Thrift Store next door.

More insistently this time, the same question. “Do you guys take donations here?” He was holding something in his fist.

Paul and I looked at each other and Ron looked over his shoulder.

His question was so strange we didn’t know what to ask back.

“It’s just been a really bad day. Do you guys take donations?”

He cut in. “It’s just been a really bad day. Here.” He stuck out his hand, dropped some money on the desk and walked out. 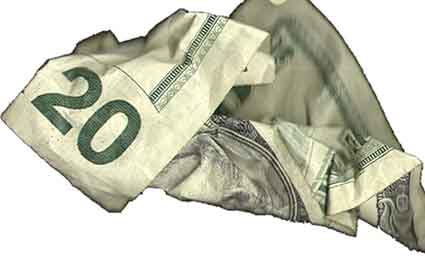 The three of us sat there for about five seconds with “what the?” looks on our faces. Then Ron said, “Paulie, you need to go after him.” I said, “Yep. Go after him. This is too weird. Maybe it’s a God moment.”

Paul went out the door. I straightened out the wad of cash. Three $20 bills.

Paul came back a couple minutes later. He said the guy told him that he had been gone for a few days and asked someone to take care of his Labrador puppy while he was away. Returning home from his trip he learned that someone had left a gate open and the dog got out.

Puppies are no match for the traffic on Southern Avenue.

Life is hard. Gates get left open and puppies get run over. Even worse, pool gates get left open and toddlers drown. People get cancer. Businesses fail. Relationships dissolve. Marriages are torn asunder. Dreams die. That’s life this side of heaven. At the Broken World Cafe, each day’s menu offers a fresh sampler platter of pain. New and different varieties of the same old hurts, arranged in different ways.

When Paul asked the man why the donation, he said, “I’m having a really bad day and I wanted to do something to feel better.”

His dog gets run over and his response is to give $60 to a swim school.

We have options in dealing with our pain. This guy could have taken his anger out on someone. He could have stuffed the sadness in his pocket and tried to ignore it. He could have climbed up on bar stool mountain. But he didn’t.

Strange as it was to witness, the guy whose dog got run over responded to his pain in a positive way. He chose to do something peculiar to be sure. But positively peculiar. He chose to do something good for someone else. A $60 donation to a swim school doesn’t bring his puppy back. And it sure doesn’t fix a broken world. But it was good medicine for his broken heart.

We’re thankful for the donation. Some kid will get swim lessons courtesy of a stranger. And whoever gets the lesson, we’ll be sure to tell the story as to how that $60 came to be.

That’s another benefit about doing good for others. It makes for a story that makes you want to go do something good yourself.

Here’s hoping Mr. $60 Donation Guy inspires you to do just that.

Kindness, Pain, When Life Is Hard