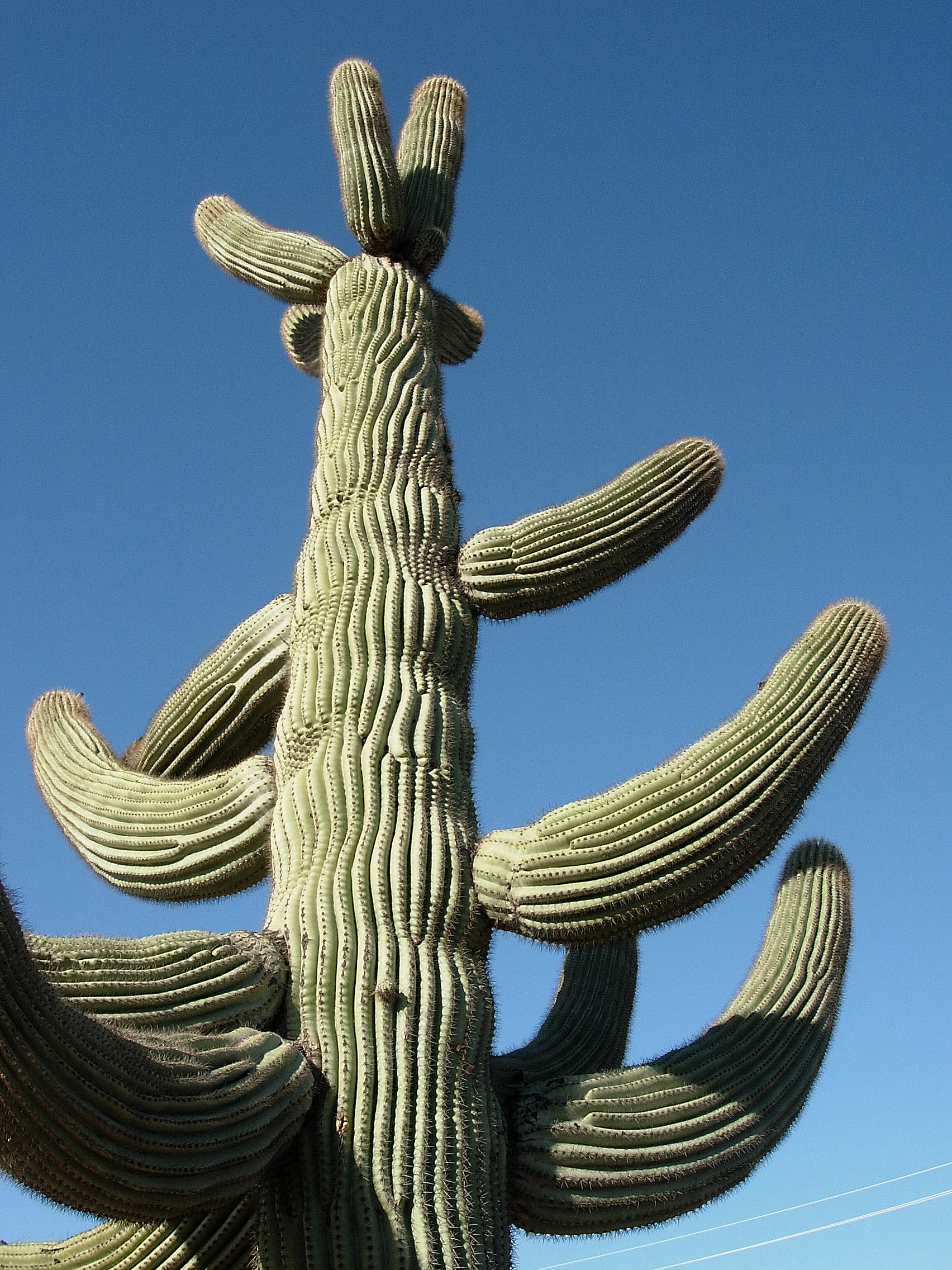 A pleasant discovery upon moving to the Phoenix valley was how much life exists in the desert. God has created a number of both plants and animals to thrive in this climate.

One enjoyable way to get some exercise during the months October through May, the time when it isn’t a gazillion degrees hot, is to hike in the Superstition Mountains. Besides getting away from the incessant noise of the city, it’s fascinating to get a close look at the plant life. The green bark of the Palo Verde trees. The rubbery feel of the jojoba leaves. The spiny needle tips of the agaves. Fiery orange blooms of the ocotillo. And if you’ve ever been in the desert after a rain, you’ll never forget the scent of greasewood in the air.

And there are cactus. The names describe them well. Chain Fruit Cholla. Strawberry Hedgehog. Fishhook Barrel. Clock-face Prickly Pear. A couple of my visiting friends have gotten a bit too close to some of the cactus. They learned the hard way that the plant is called “Jumping Cholla” for a reason.

To me, the most impressive cactus in the desert is the Saguaro. Carnegiea gigantea for you botanists. Like human beings, it is the only living species in its genus. The usual life span of the saguaro is between 150 and 200 years, yet the odds against these giant cactus becoming giant are more than great. A saguaro may produce as many as 40 million seeds in its lifetime while only one of these seeds will likely mature into a plant that outlives its parent. A saguaro fortunate to develop as a seedling will, at the age of 3 years, measure only one half an inch in height. They don’t bloom for the first time until they are about 50 years old, and grow their first arm around age 75.

A fascinating feature of the saguaro is the way it responds to being wounded. When a Gila Woodpecker or a Northern Flicker pecks through the thick waxy skin and hollows out a hole to make a nest, the saguaro seals that part of itself with a callus. It limits the damage and prevents decay from taking over the rest of the plant.

When it comes to the wounds in our life, we can all learn something from the saguaro. This giant cactus can’t stop woodpeckers and flickers from poking holes in its skin. Instead it seals the wound to keep from “bleeding to death”. Otherwise the wound would be allowed opportunity to decay. Necrosis would set in and eventually kill the plant.

We don’t have woodpeckers trying to poke holes in us. But we get wounded just the same. Life is rough and tumble. The Bible is right up front about that. It says in Psalm 34:19 that “Many are the afflictions of the righteous…”. Which is another way of saying that life is hard for even the kindest among us. Being a good person doesn’t make you immune from pain. We can’t control that. We’ve all been wounded.

We can’t always stop people from poking emotional holes in us. But we do have full control of our decision to treat, or not treat, our wound. Some of us are emotionally bleeding to death because we have chosen not to seal off our wound. Some of us are decaying from a wound inflicted on us many years ago. We’re playing the blame game, replaying in our mind the injustice done to us like a loop tape in a VCR. Blame and self-pity are drugs we’ve become addicted to. In the meantime, we look for some park ranger to feel sorry for us while we sit and decay, bitterly waiting for the woodpecker to come back and apologize.

Yet even if the woodpecker returns, full of remorse and contrition,  a hole is a hole. An apology might make us feel better, but a wound is a wound. When choose not to treat our emotional wound, we’re choosing not to grow.

Reality is that we won’t begin to heal until we decide to seal off the wounded area, limit the damage, and focus on growing up. There’s a reason 200 year old saguaros grow to be 200 years old. They don’t allow one woodpecker hole to determine their future.

How are you doing with your woodpecker holes? Are they sealed off? If you still have some open wounds, you’re not alone in your experience. God cares about you. And your wounds. With gentle grace and forgiveness, He wants to heal and seal; for the purpose of strong growth. God wants you to grow tall!

Sometime soon go for a hike out in the desert. Even if you have to hop a plane to get here, it’s worth it. Take a close look at the saguaros; these stately persevering creations of God. Run your fingers over a cactus callus and see the beauty of a century old plant that refuses to quit.

“The Lord is close to the brokenhearted and saves those who are crushed in spirit.” – Psalm 34:18