My favorite time of year here in the Phoenix valley is anytime my roses are blooming. Like right now. My back yard is awash in red, orange, white, lavender, pink, yellow, coral, and peach. The hummingbirds swoop in to check them out before moving to the front yard where they prefer the trumpet shaped blooms of the Cape Honeysuckle.

The honeybees, however, love my roses.

Several days ago I was taking some pictures and was able to photograph a honeybee burrowing into one of my Midas Touch roses. She hovered then disappeared into the center of the flower. I say “she” because all worker bees are female. (I know. That’s a great straight line for any female readers. Have fun with the punch lines, but please be kind to the men in your life.) After a couple minutes she moved on to another flower, carrying a load of pollen.

Individually, a honeybee is fascinating to observe. But the results of their corporate effort are astounding.

The average American consumes 1.3 pounds of honey per year. If we round it down to an even pound, what must honeybees do to produce one pound of honey? 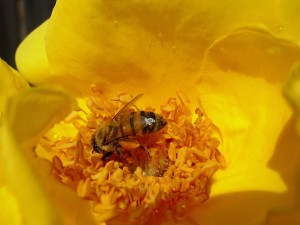 According to the Texas A&M Department of Entomology, an average hive contains up to 50,000 bees. On a warm to hot day, half the worker bees go out to gather pollen and nectar. The other half of the bees stay inside the hive and have the job of providing the air conditioning. A honeybee’s wings move at approximately 11,400 strokes per minute, hence the “buzz” you hear. Thousands of bees moving their wings at such speed actually causes the temperature inside the hive to be about 10 degrees cooler than it is outside.

Since the average worker bee makes about 1/12th of a teaspoon of honey in her lifetime, it’s pretty clear that honeybees are better together than they are alone. Alone they can’t produce enough honey to flavor a cup of tea. Together, they take care of themselves and in the process produce enough honey for everyone in the country to have a jar in the pantry.

A healthy beehive is full of bees, honey, honeycomb and activity. What you won’t find in a bee hive is ego. Be they queen bee, drones or workers, all the insects do their job. The bee in the photograph had a hive to go back to at night because 25,000 co-workers stayed behind to protect it and keep it cool. The honey she produced was a team effort.

As humans, we tend to think of our accomplishments as individual in nature. Yet be assured, wherever you are today and whatever position you’ve attained, you didn’t get there on your own. There are no self-made men. No self-made women.

If you’re a top notch sales manager you wouldn’t be noticed without the reps on your team consistently putting up great numbers.

If you’re a respected teacher you owe something to the elementary teacher who taught you to read.

If you’re a scholar, you earned your PhD and contributed to the body of collective knowledge only after reading the works of the masters. Or, as Toynbee put it, “we see farther when standing on the shoulders of giants”.

If you’re a master mechanic, you likely attribute some of your skills to your Dad who let you slide under the Chevy on the creeper and watch him turn a wrench.

If you’re a good parent, you owe something to those older and wiser who cared enough to impart their wisdom and life experience from raising their own kids.

Above all, you and I owe everything to a gracious God whose faithfulness is great and whose mercies are new every morning. (Lamentations 3:21-23)

Wherever we are and whatever we achieve is due to our hard work, persistence and the contributions of others in our life. Alone, we are, well…alone. Together we accomplish great things. We are better together.

This week take time to reflect on the people who have contributed significantly to your life. Then write a note of thanks to them or give them a call and tell them specifically what they did for you and what you learned from them. In doing so you’ll encourage them beyond measure.

Because no one ever forgets hearing these sweet words:

“You made a difference in my life.”