During my years at Phoenix Seminary in the mid-1990’s, I had the privilege of getting to know Dean Borgman, then Vice-President of Boeing in Mesa, AZ. If memory serves, Dean was a member of the design team for the Apache Longbow attack helicopter.

Dean gave myself and other ministry leaders from our church a tour of the Mesa plant where the Apaches are assembled. Developed during the Cold War as a defensive response to the multitude of enemy tanks lining the borders of West Germany, the Apache’s chief purpose is “tank killer”. It does its job supremely well.

Armed with 30mm cannon and 70mm Hellfire missiles, the Apache received its greatest notoriety during Desert Storm where its firepower against Iraqi armored tanks became legendary. During the tour, Dean pointed to a framed glass case high on the wall. Inside was a large, ragged white piece of cloth, presented to the employees of Boeing. As Dean tells the story, toward the end of Desert Storm two Apache helicopters were returning to their base to refuel and rearm. They had fired all their missiles and expended every bit of ammunition. Flying over a large dune they found themselves in front of 300 fully armed Iraqi soldiers. With no way to defend themselves, the pilots feared the worst. Yet instead of taking the anti-aircraft fire they anticipated, what they saw were 300 Iraqi soldiers raising their arms in surrender.

The Apache’s devastating reputation was so well known the enemy gave themselves up at the very sight of these helicopters. It was the ragged white cloth in the glass case the Iraqi soldiers waved when they surrendered. 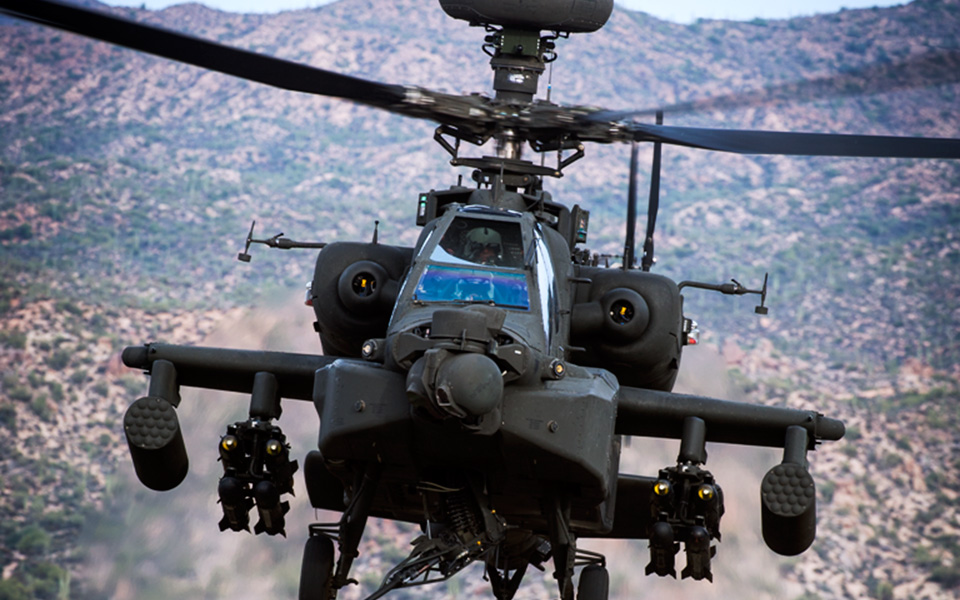 The Apaches we saw were returned for refurbishing. Stripped down to the shell, even the paint is removed. Frames are straightened, weapon systems upgraded, and the wiring completed. If you, as I, have ever wondered how in the world a single helicopter could cost (as of 2014) around $35 million dollars, after seeing the 7 to 8 miles of wiring that goes into each Apache the price tag seems more reasonable. The Army has about 800 Apaches that are routinely rotated back to the original manufacturer to be overhauled, refurbished and refitted for continued service. The process takes about 8 to 9 months per aircraft.

When a piece of equipment we are working with breaks down and our efforts to repair are unsuccessful, we assume the original manufacturer should know more than anyone how to fix the problem. After all, they are the designer and builder. The buck stops there. If they don’t have a solution to the problem, who does? I’m certain that the United States Army expects Boeing to have an answer when one of their Apaches malfunctions. It’s a reasonable expectation.

Unlike the Apache, most of us can’t take 8 to 9 months out of our life to be overhauled. But when’s the last time we temporarily rotated ourselves out of service to be reconditioned by our Original Manufacturer? Are we checking in for regular maintenance? Is God having opportunity to straighten our frame and re-equip us for greater efficiency and service?

Or are we too busy flying to be bothered with periodic inspections to see if our rivets are still holding?

Most of us only feel good about ourselves when we’re busy. Our culture affirms a schedule bulging with to-do lists and meetings as a badge of honor. We brag about our productivity and whine about down time. For us to slow down and sit still for a few moments feels unnatural. Recalling the title of a Tim Hansel book, “When I Relax I Feel Guilty“.

When’s the last time we blocked out 30 minutes in the middle of our frenzy to simply sit and think about why we’re doing what we’re doing?

Better, to ask God what He thinks about what we’re doing?

It’s a lot easier to tighten a few rivets than it is to sort through a smoldering pile of debris. As your Creator, God wants more than anything to see you fulfill your potential and purpose. As one designed and manufactured by Him, be certain to regularly rotate yourself out of service and into His presence.

You’ll fly higher, longer, and greatly reduce the possibility of a crash and burn.