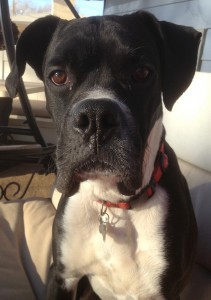 The good news is our new dog Bentley is smart enough to come in out of the rain. The bad news is he’s afraid of it.

About 4 o’clock in the morning Bentley let us know he needed to go outside. We opened the door to a pouring rain.

We coaxed. We encouraged. We commanded.

He stood there. Shaking. Trembling and terrified.

He had let us know he had to go.

But he will go.

According to our veterinarian, Dr. Casey Carrothers, Bentley the Boxer Dog is between three and four years old. We rescued him from a poor living situation. Simply put, Bentley has issues. In addition to being afraid of rain, he has a bad case of separation anxiety. He freaks out when we leave him for any length of time. And for all we know, he might be a drug addict. After we got him fixed last weekend we came home to find his pain med bottle on the living room floor. The child proof cap did its job, tight and secure. However, the bottom of the bottle was chewed off, its contents scattered on the carpet. 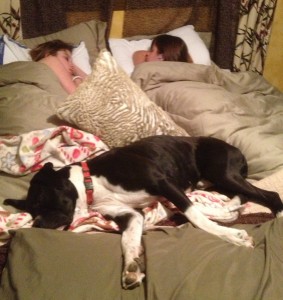 Bentley is kind and affectionate. He’s a snuggler and loves to be where you are. He doesn’t bark unless you’re a cat. He’s great with other dogs and kids. His first night here I looked for him and found him sleeping on my girls’ bed.

But he has issues.

Which brings us back to the rain and the stand off in the living room.

Bentley weighs 70 pounds. Growing up on the farm I wrestled hogs bigger than that. But that was a long time ago and it’s not like Bentley is cooperating. He’s 70 pounds of muscle in reverse. I put his leash on and with a push I got him out the door to the covered porch. But not an inch further.

If only we could solve this problem by sitting on the porch. I sat down on the swing and Bentley joined me. He squeezed in tight, staying as far back as he could from the water running off the roof.

I talked to Bentley. I reasoned with him. I told him it was just water and there was nothing to be afraid of. That he could just run out and do his business and run right back inside. As if he could understand a word I said.

A flash in the south sky lit up the lake and a few seconds later thunder reverberated through the canyon. Great. As if he wasn’t scared enough. He pushed back against me and dug in.

He told us he had to go. He still hasn’t gone.

We have to get this done.

We engaged in a tug of war to the steps and finally down into the yard. It’s raining harder now. “Ok, Bentley! Good boy! Do your business so we can get back inside.”

But Bentley just paces the yard. Seriously, buddy. Please. Let’s get this done. He has to go. But he isn’t going. I’m getting soaked. What to do?

“C’mon, Bentley! Let’s go!” We went out the gate as if we were going for a walk. It’s dark and there’s a small river of water winding down the road in front of our house. Bentley finds the big garbage can down the way that he likes to sniff and lifts his leg.

“Good boy, Bentley! Way to go. Let’s get back inside.”

Bentley has issues. So do I. So do you. So does everyone.

It would be nice if we could resolve our issues on the porch where it’s nice and dry. But we can’t.

If we genuinely care about helping  others with their issues it means a willingness to come off the porch. To get wet and maybe even a little muddy as we walk with them till victory is achieved.

Maybe it’s a small victory. But it’s a victory.

And it won’t happen, for them or for us, if we stay on the porch.

“You can’t stay in your corner of the Forest waiting for others to come to you. You have to go to them sometimes.”