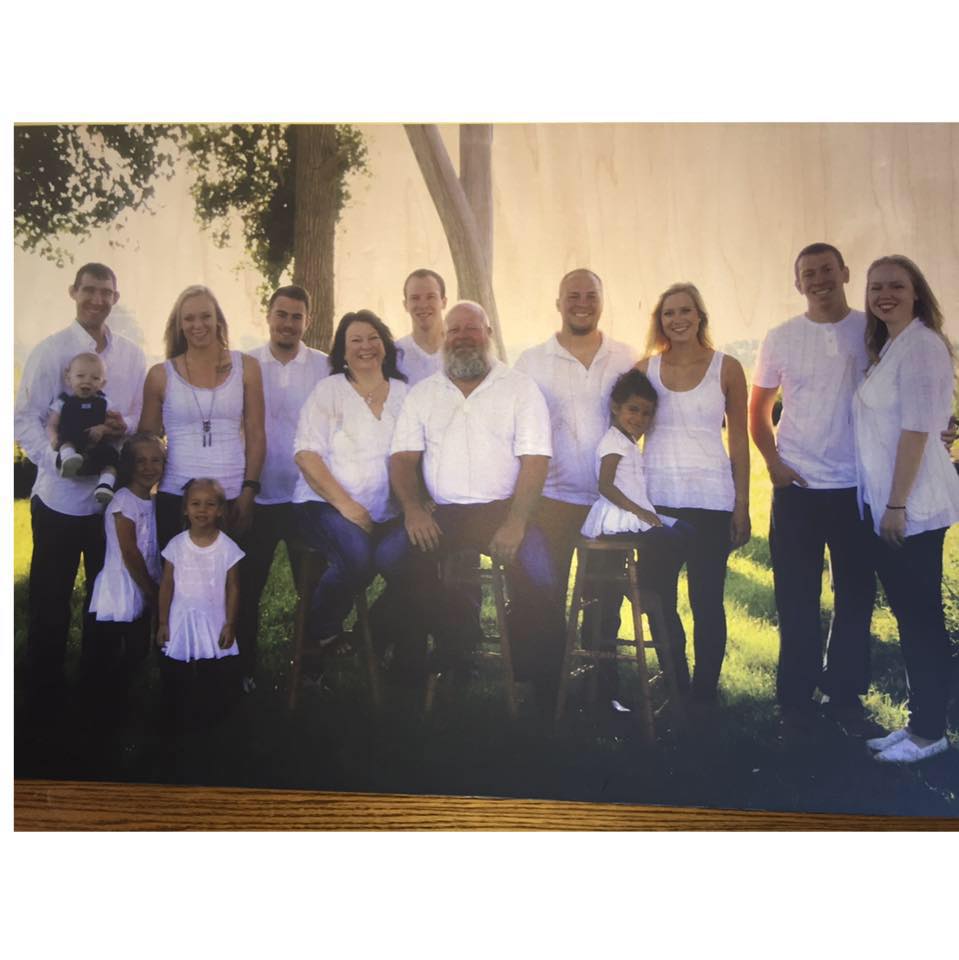 Tis’ the season to see family photographs on Facebook. Electronic versions of Thanksgiving and Christmas cards. This morning I looked at a very nice one of the Lyndon Johnson family. Not LBJ and Lady Bird. Rather, Lyndon Johnson, one my best friends growing up.

Lyndon and I did a lot together from birth to high school graduation. As preschoolers we ran and played on every square inch of the First Baptist Church in Swea City, Iowa. At 5 years old, we shared a hospital room when we got our tonsils out. We both had mini-bikes. We took trips with our Dads to the old Metropolitan Stadium to watch the Minnesota Twins play, hoping to see Harmon Killebrew launch a fastball into the upper deck. A couple times, he obliged us.

We played sports together, worked on our Dads’ farms and engaged in the usual high school shenanigans. We even managed, in separate instances, to shoot ourselves in the finger with a gun. But that’s a column for another time.

In Lyndon’s family photo everyone’s wearing white shirts and jeans. Yet it’s not what Lyndon’s wearing that got me thinking.

I, too, have a family photograph. Hanging on the wall of my classroom, it’s a four generation Thompson family photograph taken in 1965. I love the picture because no doubt it’s the image that caused the photographer to say, “Let’s try this again.”

Cousin Jack is lunging out of Grandma’s arms. Greg stares like an alien. Kaye sucking her thumb. My Great Grandma Maggie is adjusting her glasses. Great Uncle L.D. eyes the door, looking for an escape. In the middle sits Great Grandpa Thompson, hands folded, with the same expression of silent endurance he has in every photograph. Then there’s me, the kid with the big head in the lower right corner. On my Mom’s lap, paying attention to the floor instead of the camera.

Flipping through decades of photo albums, the pattern of family photographs is clear. When we’re kids we’re on the edge. Usually on a parent’s lap or kneeling on the ground.

As teenagers we stand by siblings, faking smiles while poking each other in the back.

When we marry we’re in the photo with an arm around our spouse.

Then we have our own kids and we’re not on the edge anymore. 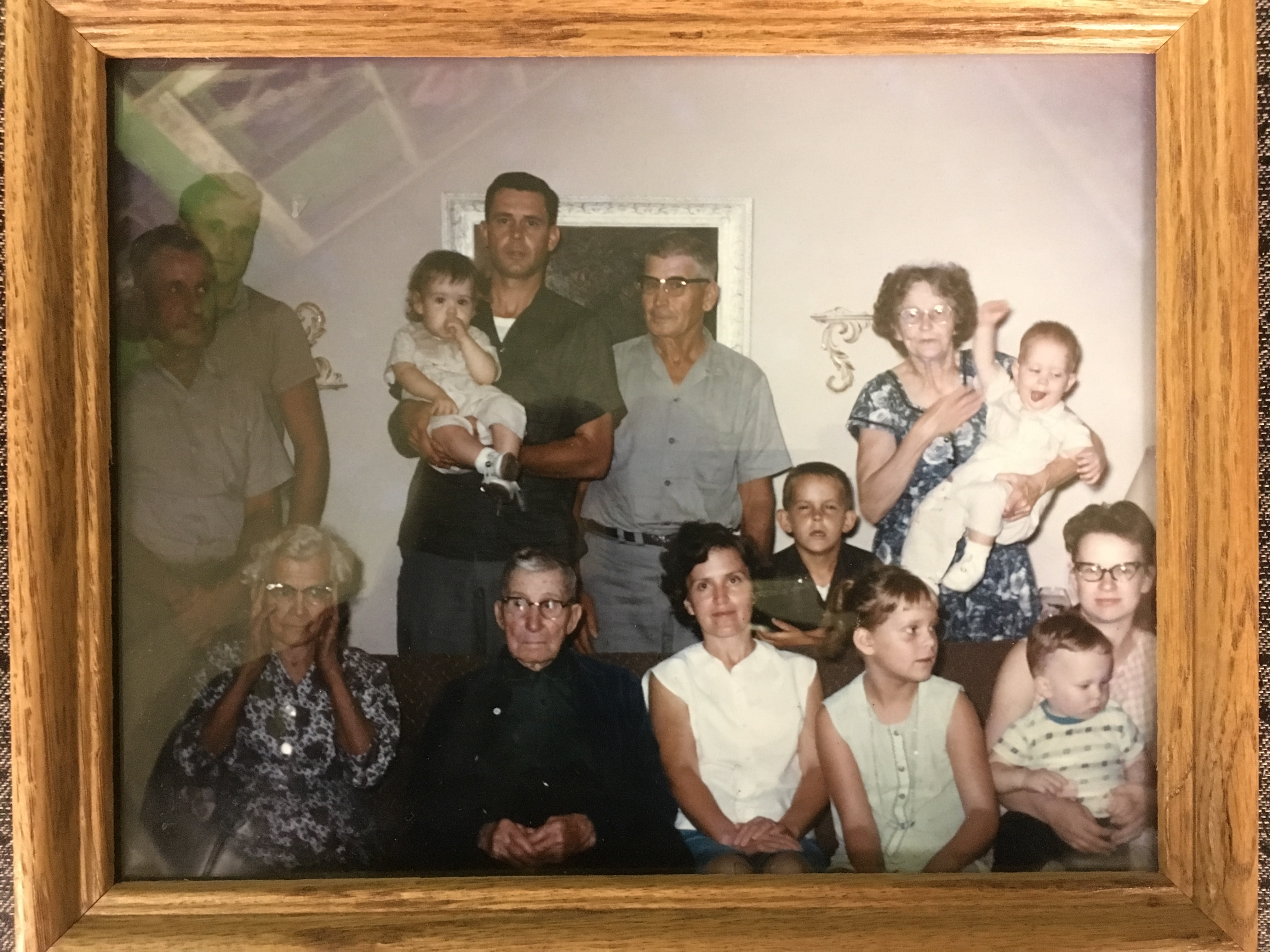 The kid with the big head on his Mom’s lap isn’t on the edge anymore. The passing of my great-grandparents, grandparents, and father has pulled me from edge to center.  In 53 very short years I’ve gone from young son and teenager to father and grandfather. Unless someone soon discovers the fountain of youth in a cotton field between here and Amarillo, I won’t attain great-grandfather status.

The irony of being on the edge of the photograph is that it’s the season of life we’re most likely to live on the edge. Either out of daring or foolishness, we engage in activities and experiences our responsible adult self will someday wonder, “Did I really do that?”

Did we really try to fly off the garage roof with a bedsheet for a parachute? Did we really jump out of a boat at full speed? Did we really pack 17 people into a Chevy Blazer to drive to Jake’s Pizza in Fairmont, Minnesota? Did we really shoot ourself in the finger with a pellet gun?

I speak often with my students about the importance of making purposeful memories. I make them write Paul Anka’s lyric in their notebooks. “Memories are times that we borrow to spend when we get to tomorrow.” We can’t spend memories if we don’t make them.

When we’re on the edge, we’re the subject of the stories.

When we move to the center we become the teller of the stories.

Save some tragedy, we all move from the edge to the center. The big question is, will we be able to do more than just sit there when we take our place?  Will we have taken the time to make the memories and create the experiences that will become the stories our loved ones on the edge will be expecting to hear?

When we take our place in the center, our pockets should be full of memories. Tales of days gone by should be hanging off our belt loops like nostalgic key chains. As keepers and communicators of our family history and heritage we also have the responsibility of encouraging  those on the edge to live life in such a way that when they arrive to fill the space we leave behind, they will have stories to tell.

Wherever we find ourselves in the picture, we are wise to make memories on purpose rather than by chance. To live fully. Take some risks. Be silly. Be serious. Think critically. Be grateful. Plan and pray. Dream and do.

When we’re on the edge we never imagine moving to the center. Because we don’t move ourselves. The passing of people and the passing of time moves us.

Lyndon and I have moved from the edge to the center. I doubt either of us feels old enough or ready enough to take our place there. Yet here we are.

As we sit around the table this Thanksgiving, I hope you’ll take note of where you are in the picture.

If you’re on the edge, know that you won’t always be there.

If you’re in the center, tell your stories.

Because you won’t always be there, either.

“We will not hide them from their children, but tell to the coming generation the glorious deeds of the Lord, and his might, and the wonders that he has done.” – Psalm 78:4